I’m sure that nearly every visitor to Bangkok has been to JJ or Chauchak Market, sometimes I think that they are all there at the same time as me, wow is it crowded! No question, it's one of the world’s great markets for tourists and locals alike, it often seems to me there is little you cannot buy there. However after years of living outside Thailand my tolerance for the crowds, and most of all, the heat, is decidedly less than when I was a Bangkok resident. This is why after 30 minutes or so my resolve to find everything on my list crumbles and I head for a far cooler and altogether less frenetic place, Or Tor Kor Market. Although this is just literally round the corner from JJ market it’s much less crowded, and to me altogether more interesting because Or Tor Kor market is a food market, in fact it’s Thai food heaven! This is the place to come to when you want to buy the very best of Thai produce. Admittedly, not the cheapest of Thai markets but the quality and variety is outstanding. It’s also a great place to eat with a wide range of food and drink stalls. This was often my last shopping destination before flying back to the UK. My chance to stock up in bulk with the items I would find it impossible to buy outside Thailand. Tourists return from Thailand with suitcases full of Chanel and Dior knockoffs, Thai’s return with suitcases full of food. At the stall in the picture below, I have often found myself standing next to someone on the same mission as me, buying large quantities of shrimp paste to fly back with. This is not something to be undertaken lightly, it requires much forethought and planning, a lot of shrinkwrap and airtight containers. Yes, it stinks, even to me. Though I have often thought when squeezed into a crowded train at Heathrow airport making my way into town, that if it leaked just a little bit I would have the luxury of a seat in an empty train carriage:-) And if you’re wondering why I would go through all this hassle for something that I could buy back in the UK, the answer is simple; the quality. There are a lot of regional variations to shrimp paste, a situation not unlike that of cheddar cheese in the UK. You have your supermarket cheddar, and then you walk into a specialist cheese shop (Yes I'm that rarest of beings, a cheese loving Thai!) and sample some of their cheddars and realise the only thing they have in common with the supermarket cheddars is the name. So it is with shrimp paste. Here I can sample and compare shrimp paste from Rayong, Koh Samui, each of them prepared differently, fermented for different lengths of time, each of them with different characteristics. The shrimp paste I could buy back in the UK would be the equivalent of those supermarket cheddars. These days I use so much shrimp paste it makes sense for me to import my favourite shrimp paste directly. Would you notice the difference if I were to use one of the supermarket shrimp pastes in my Thai green curry paste instead of the shrimp paste I prefer? I’d like to think you would, I know I certainly would. In the West shrimp paste gets a bad press and is often misunderstood. So many times I’ve seen on Internet forums comments like “I never use shrimp paste in my Thai curry I can’t stand the smell/taste of it” which kind of misses the point about shrimp paste. You see, even we Thai’s don’t spread it on toast and eat it for breakfast. It is one of our umani ingredients, used properly most people would never know it was in a Thai curry, but you would certainly notice its absence. Enough, back to the Or Tor Kor market! How about this for a mortar and pestle? It would certainly be on my Christmas wish list if I had somewhere to put it! Thai mangoes are on my wish list at any time of year, and that is usually where they remain as they are extremely hard to come by in the UK. Wouldn’t even put this on my wish list as I know the next time I taste it would be the next time.back in Thailand. Totally delicious even to Westerners:-) This is Khao Lam (ข้าวหลาม) It's sticky rice mixed with coconut cream and different fillings like sweet red bean etc.The tube is stuffed with the filling and grilled over hot coals and the filling steams and expands in the tube. A whack with a knife from the vendor and the tube opens to reveal dessert nirvana! Sadly a lot of Westerners never get to try this, I'm pretty sure it's because it looks kind of weird and they are hesitant about asking, (see Bangkok Street Food). I knew a vendor who used to make delicious Khao Lam in what was a mainly Thai residential area until a new hotel opened. She told me that tourists would often stop and take pictures and sometimes point and ask questions but she could only speak Thai and they rarely, if ever, bought anything. All that changed when her niece stopped by one day after school keen to practise her English, sales rocketed and niece was put on the payroll! I have to finish off with a Mayasian iced tea and roti. Time to head off down to the MRT where you receive a gentle reminder, that as far as the Thai transportation authorities are concerned, there are things in life more smellier than shrimp paste! Opening Hours: 06:00 - 20:00 (every day)
Location: Kamphaengphet Road, opposite Chatuchak Weekend Market
MRT: Kamphaeng Phet
How to get there: Take the MRT subway to Kamphaeng Phet station. Use Exit Number 3.

This is definitely the best red Thai curry paste I've ever used, I made it with the duck breast using the recipe on the website and was blown away with how fresh the curry was. Also all the other tips on the website have truly revolutionised my Thai curry game, frozen kaffir lime leaves and finding the right coconut milk is a must! Thank you for your delicious pastes, I will be trying the massaman next 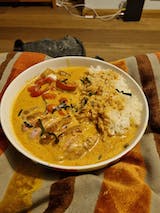 Really really impressive paste, delicious results and so easy to use